The day leading to what I would define as “Distress Drawings” Drawings in the sketchbook where I am in a impatient state of mind thereby drawing multiple compositions in one page only in an unusual speed, unfinished thoughts, lines which are wavy and not “in control”. I am desperate to release out all the compositions from the head which are circulating through out the day or for many days. They force themselves out as lines which need to be expressed “Urgently”.
“In Distress” also occurs where it is a break from the natural way of drawing. In this case, i am reading, or have been reading for days, I have been reading something new, a new theme and then the mind creates compositions in the head from the readings. It is a state of anxiety / overwhelming.

I can not distinguish if I am anxious, stressed, overwhelmed or can not take any further information. I pause, maybe not pause but stop the video on the net, or the printed article, of the facebook feed or the you tube video. I stop and then walk.

“In distress” can mean a state in which you draw with an unbalance force? no ! as i write looking at the sketches, the drawings in the sketchbook – I see them as exactly what is going on in the head! They represent an unstability of holding on to one idea or how i create the works – I repeat an idea, or a sketch to a level of perfection / satisfaction. I am not in a rush to jump to the second thought, but here it is a waterfall of a mix of ideas, of compositions, of disturbing compositions which maynot be created further but are “clear” to me.

I would like to give an example of what I am drawing. Suppose a wall falls on another wall, or two walls fall on to each other, damaging themselves in the process. Now this is a thought, an idea which has been generated. And if this thought carries on for few days, I will draw it in the state of distress as a quick mark making where the lines will not make sense but the idea / the picture will fall on the paper. It will have clarity when I will see it. It will show the feel of the walls falling not as an illustration but as “thought lines”.

Today the Rickshaw took me to the market and i knew i would draw in the cafe eating or drinking something. I was helpless as i ate Corn and beans salad with 6 chicken piece dish. I had to take them out. The speed, timing did not allow me to even turn the page. My lines lost out on my previous forms, I hear myself speaking – What if this happens? What if i do this? this should happen! i need to draw this! like a desperate architect creating a house on paper as i lacked the actual materials of construction, like i could not wait for the sand, bricks to arrive, i start laying my own bricks on paper making a wall.

My sketchbook is A 3 size. I can not carry an A 2 in my bag. So this is like a black board of my elementary school. Corners, near the spring, center, overlapping, down below and top spaces, all get filled, or were filling in a state of “distress”. A state which was not fixed but scattered. 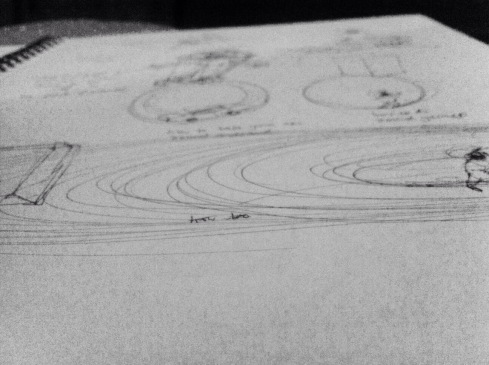