inability to focus, too many concepts in the head, I sit in the kitchen, or the room I choose to work in, fleeting thoughts of a plant, a potted plant suspended in the air. I am imagining it to be suspended in the air with the plants flowers, leaves bending downwards. I eat lunch and the coloured patterns on the plate, I count them and imagine the plate being inside the studio space and I am drawing around the plate. I see a wiper outside and my mind enters a fantasy space of a wiper cleaning not the floor but something else. Everything around me, well almost everything is expanding and contracting, zooming in and out, I decide to enlarge something, usually and not shrink it.

It’s been two weeks so far. I see the qualities of schizophrenia in me. The imagined part of ‘abnormal perception’.

But in my case, it’s not only about such thinking, it begins in the room with ways of dealing with memory and thoughts, memories of how others work, so I’m repeating something which I have seen before. And I’m writing the immediate thought, or I am holding on to an idea. I am holding on to it like ‘dal makhni’.

Memory is spreading like a broken bottle of ketchup or ketchup being splattered in the room. I do want the shower curtains, a door, or a handle, and I need the bathroom to come up, the stop motion animation where doggy is cut apart and I want the studio space to turn into a hotel.

I don’t know if all this is drawing, mental exercise, or sketching abilities, but it’s about projecting thoughts, a lot of…maybe not lot of but questioning, and then answering or writing something which I feel is what it is… 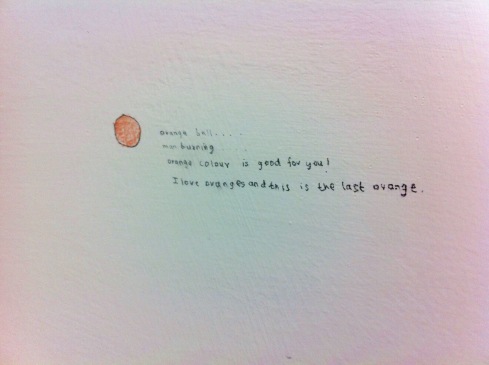 ( drawing and pencil colour on the wall when the residency started)
I mean, it could be anything! Now objects, drawings can become anything!
PART II
How I identify a problem is or a situation is that, the different thinking processes are generating different responses from the audiences. So it seems I am inside something. When a conversation happens accidentally, it is a way of pushing a thought forward.

Alexey buldakov points at the wall above referring to the line drawing of the three legged form. The conversation breaks but triggers a thought of them flowing above the ceiling of the room. Like chakras I see them spinning. I have yet to ask Alexey’s interest in the the three legged form. But I see the continuation of the thought process. So now I am inside the work. And at other times I am outside the work. 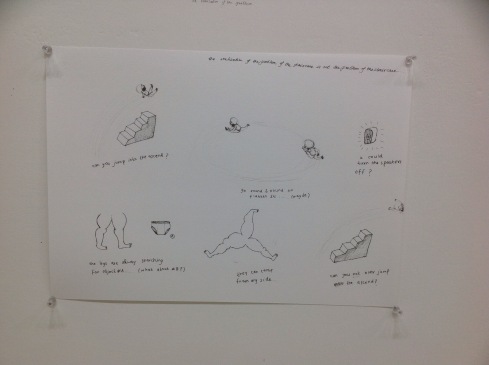 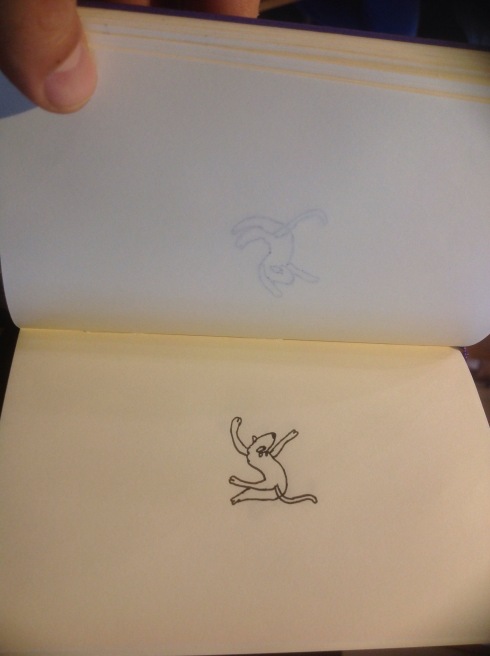 (Part of an animation sketchbook)
I’m somewhere here too… Where the dog flips excessively. It is an odd behaviour.   It is not a normal behaviour by a dog. But it is normal for me to imagine this Reality.
PART III

My own history of cut outs. And then people facing mental illness do skip logic. I was somewhere logical in approaching an illogical thought.

For some reason, Vivek, a residency artist found it the most logical image to be added on Instagram.

I just don’t get it?