Im not in nehru place anymore. A computer market, i think i’m right if i say it is a computer market because there are computers everywhere. May be now it is laptop market or laptop repair market or a hardware accessories market, as if every part is here for you to make an ideal product, you could design anything.

I’ve been working in my studio space thinking of activating the Khoj outdoor space. I have no images but only memory of the spaces i could work with. I have been cutting paper and I am not sure if I am doing a drawing intervention, or simply an intervention of some sort. I mean to say, there is a pipe hole, a hole with approximately a six inch pipe.

You can see it and think of so many possibilities and then let go of each possibility and not do anything. Next to it an egg has fallen and smashed itself on the stone placed below. So what do i imagine ? Eggs falling, eggs raining, am i to be funny, satirical, Should i even react to anything?

I’m not in nehru place anymore. When i sit in the room next to the cafe it is not my studio space, so things are not moving. And was I even moving in my studio. I think I was shifting in my studio from doing something I could not do anymore and then thinking of the Khoj space. I don’t work this way, I don’t imagine but I am usually in the space. But now I can just imagine without being in the space.

What I can not do is take a hammer and break the mirror down below or uproot the tree or make a hole in a wall or just jump off to the building in front of Khoj. I am not a frog, or a kangaroo or an animal, like the monkeys I saw in the hills. I lack the ability to jump. And so I have to sit and think.

Sit and create miniatures because I am large.

Is activating space, a way to activate the mind to think? 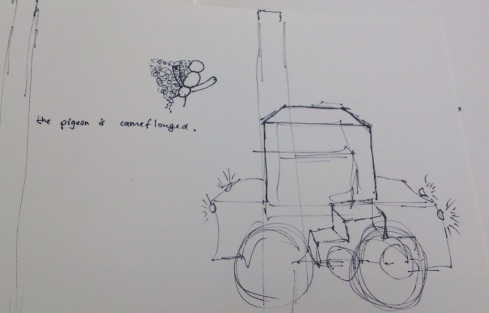 I think as of now I see a motion, an act of motion to things which are fixed. Things which have been built inside the building. In a sense, from the period of thinking in the studio and creating objects which due to repeated thinking stayed as imagined objects, to the period of entering the space, a singular idea of motion started to travel through out the space.

Is it storytelling ? I think so…

Do you form your own architectural space which can challenge the functional nature or question the nature of the building itself?

Is it a way to suggest that this is not how things should be, that I imagine it to be like this for now. So does the ground have any significance beyond its functional nature? Is the functional nature important for it to function as a building?

Is it an inactive space without such interventions?

A drawn idea is as real as the real thing or even more real that what has been created because it has not been created.

18.04.2015 sketches. few more days to go to see how things shape up, as the outside spaces of Khoj are also activating themselves. But then it is also easy to just drop them as though upon thought.

A project as of now floats with the idea of Parametric design, where I am shown in a sketchbook how a simple pot is constructed through input of data in a software. Behind the Khoj building a multi functional space is activated by another artist creating an object with found materials as it will find a hidden spot in the building. Some one searches for passages, while others are busy suspending in the center of the building. The center of the building is the Court yard.

Then you can make any place as a center. A center is not the center, not the middle point of a line or a circle. Simply because you land into the courtyard and you can create a temporary structure of scaffolding and then these scaffolding disappear leaving the object suspended in air or in the case of one of the projects as a way to assist the object to be held. So when you enter inside, you look up, the impact is at its maximum in this vacuumed space. This space is not empty, it never was but was seen as an empty space, so now it can have something. The inner sanctum, the inner space gets activated / deactivated.

But i sit on the painted seats, watching anything suspicious in nature. My suspicion is getting alarmed of things which move, are unnoticed. Is this how i see, through a non coding language, just something as a fly which appears on the railing beside me?