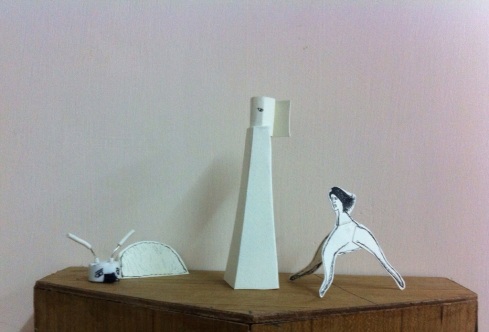 It is a stop. Stopping of thinking, of ideas, of a way to move. In my space I have removed all the criss crossing of multi coloured, multi dimensional wires which were crossing across the room. At this point, a housing colony has erupted. A doll like Homes with imaginary creatures. That’s how I see them, unable to distinguish from reality, imagination. It is the material, the scale and the drawing marks which constitute the forms at this stage. The materials create their own imaginary creations different from working on paper. It is a change from 2d to 3d. Such creations also shed a light on the nature of imagination versus reality. In reality I see myself and so I draw myself with similar features through the help of lines. The imagined, the unreal, the dream like creations reflect what is not me because it does not look like me. I perceive myself what I see in the mirror, what i think in the head, but in the act of creation with unknown and known materials, I see a sense which I can not identify at this stage. I am surprised to see the creations. I rush to give them titles, to frame them in a series of thoughts, but then I see them as independent forms in space, as sculptures which are also bound by the materials I use.

‘…If we can lose our reference marks unbeknown to ourselves we are never sure of having them when we think we have them; if we can withdraw from the world of perception without knowing it, nothing proves to us that we are ever in it, nor that the observable is ever entirely observable, nor that it is made of another fabric than the dream. Then the difference between perception and dream not being absolute, one is justified in counting them both among “our experiences,” and it is above perception itself that we must seek the guarantee and the sense of its ontological function. ‘

The visible and the invisible, merleau ponty 1968